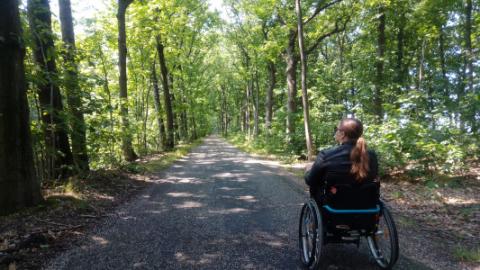 The Special Mobile 4 Days was held in Meijel from 25 to 29 July. Wheelchair users Dieuwertje and Jochem participated with their electric add-on bikes. “It was great fun. Beautiful routes, beautiful environment and warm people. We will participate again next year!”

The Special Mobile 4 Days, or BM4D for short, is relatively new: it started in 2018 with 15 participants. In 2019, 30 participants already participated. Due to COVID-19, this event was also halted for two years, but another BM4D could be organised this year. With success, because this time there are already 70 participants! At 26 years old Dieuwertje is the youngest participant.

“It was our first time and that's why we opted for the shorter route of 15 kilometers. We both have an energy limitation and we didn't know what the impact would be,” Dieuwertje says.
Jochem would have liked to drive the longer route of 30 kilometers right away. “But I sometimes overestimate myself and then I regret it afterwards,” he laughs. “In any case, we had to drive from our hotel in Sevenum to the starting point in Meijel every day. That is another 10 kilometers one way, so we drive 35 kilometers every day!”
Dieuwertje adds: “In terms of battery, I wouldn't even have made it to drive the 30 kilometers. Jochem has his own hand bike with an extra battery, so he can drive about 50 or 60 kilometers. But I don't have a hand bike myself yet. At EWTS I was able to try out a hand bike and it has a range of about 35 kilometers.” 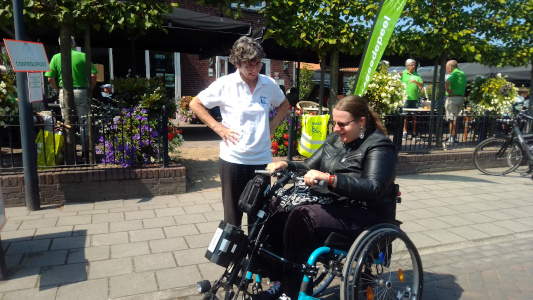 The BM4D is for anyone who uses an adapted means of transport. It doesn't matter if you use a regular or hybrid hand bike, a fully electric add-on bike, a mobility scooter or any assistive device. It's about having fun.
What is special about the BM4D is that you can also choose to participate for only one, two or three days. All participants will receive a gladiolus at the end of the last day. You will only receive a medal if you have participated in all four days.

Dieuwertje: “We couldn't make it the first day because of other arrangements. But on day two – our first day – we encountered a group of two couples at the starting point. We got talking and were soon invited to ride with them. Very nice, isn't it!” she continues enthusiastically. “Later on a terrace, they said that they had met at the first BM4D. It clicked and they have been cycling the tour together ever since.”

Jochem tells: “On the last day we rode with another group, also two couples. One of the men turned out to have plotted the routes. He told that it needed soms fitting and measuring, because of course you want the stamp post at a venue that is wheelchair accessible and also has an accessible toilet. That makes the choice quite limited. He explained he started on these venues and devised the routes around them. The results are impressive!"

The Special Mobile 4 Days goes through the Peel, on the border of North Brabant and Limburg. The routes are varied: along the meadows, through the forest and through Meijel and nearby villages. “We enjoyed the area!” Dieuwertje says enthusiastically. Jochem agrees: “Such a beautiful environment! That is great cycling.” 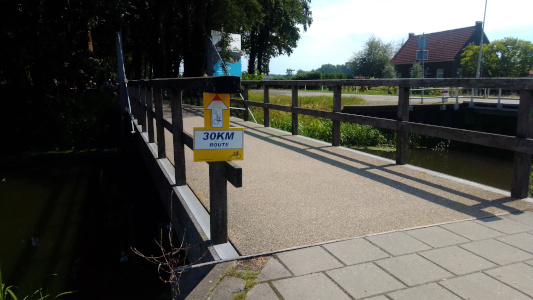 The beautiful routes through the Peel. (Photo: Jochem Verdonk)

The BM4D takes place during the national four-day cycling event. Regular four-day cycling events are organised all over the Netherlands. Also in Meijel. According to the regulations you can only participate in the Fiets4Daagse (4-Day Cycling) De Peel with a bicycle, although for years people with a mobility scooter or hand bike have participated. The BM4D distinguishes itself with shorter distances, evenly paved routes that are at least two wheelchairs wide and the freedom to participate with all sorts of adapted (bicycle) transport. In addition, the BM4D also offers advice from a physiotherapist and sports massages and/or relaxation massages. The Fiets4Daagse De Peel and the BM4D do work together. For example, they share first aid and the technical assistance service for people who have a breakdown on the road.

“On our second day I was very unlucky,” Dieuwertje says. “We had to turn left at a roundabout, but I saw the route sign too late. When I wanted to turn left, the street turned out to be going up and I tipped over in the bend. Fortunately I was able to catch myself with my hands, so I only have scrapes and bruises myself and I was shocked! But the attachment of my hand bike had broken off.”
Jochem adds: “Someone from the (regular) Fiets4Daagse approached us almost immediately and called the technical service. They have helped us tremendously. The technical men could not solve it themselves and that is why they went to a befriended company. There they were able to solve the problem in such a way that we could drive out of the BM4D. Big compliment to these men!” 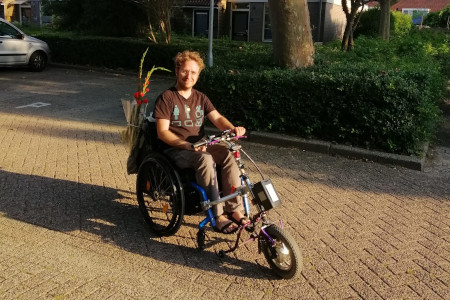 Jochem at the end of the ride with gladiolus. (Photo: Daimon)

The date for next year's Special Mobile 4 Days is already known: 18 to 21 July 2023. Dieuwertje and Jochem will certainly participate again. “And then we go for the 30 kilometers!” laughs Jochem. "Sure!" says Dieuwertje. Will you also join us?

Many thanks to Henry Honing of EWTS for making the Iconic E-Trike available.