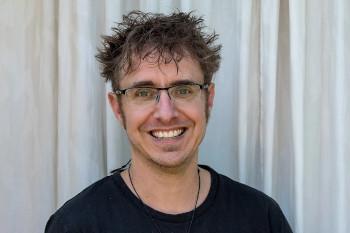 Sometimes I have a good day and I go outside incognito. Then I'm a roller who is walking. A roller in disguise, so to speak. That is a disconcerting experience, which shows me again how easily I have become used to the privilege of being a roller.

In my columns I regularly write about my experiences as a roller. About how differently society treats me when I bring my wheels with me. You get used to that faster than I realised. Then it can be sobering to walk down the street again. Not that I care much, thankfully.

“As a roller, I always get priority. Even when I'm behind big shark's teeth.”

When I'm walking, when I cross the street, I suddenly have to wait for a gap between the cars, which gives me enough time to cross the street. No one who automatically stops for me. Even at a zebra crossing I am not sure of my right of way as a runner! As a roller, I always get priority. Even when I'm behind big shark's teeth.

If I am in a full bus walking, then a "healthy young man" is expected to get up when elderly or "disabled people" board. But I am not healthy – and not as young as people usually think I am. That once led to an annoying conversation with a fellow passenger.

It was rush hour. It has been a tiring day for me and I was exhausted. Luckily I boarded at the starting point and therefore I had a seat. But the further we drove, the more people boarded and soon the aisle was packed. Then a blind person boarded. A lady across the aisle thought I could get up so that blind person could sit. So I calmly replied that I couldn't. Yet she insisted that I should get up. But when I suggested that she get up, she couldn't either. No, she really thought I should get up. In the end I kept silent. Fortunately, there was someone behind us who could get up so that the blind person could sit.

“The bus ride would take more than half an hour and I can't manage that standing.”

I've struggled with this for quite some time. Of course I realised I had done the right thing for myself. It had been an (too) intensive day and the return journey was a bit of a stretch. The bus ride would take more than half an hour and I can't manage that standing. But it remains painful that no one can see that from the outside. (At most people see a “healthy blush” on my cheeks.) And so people think my abilities are completely different and I am considered to be rude.
As a roller, I wouldn't have occupied a seat to begin with, so getting up would have never been considered. I would have taken up three standing places, but I would never have been held accountable for that.

When walking in a store, I just have to join the queue at the checkout. Even if the queue is long, while I can't stand for a longer time. Because when I stand, I have complaints, so I always wiggle from one leg to the other. That often attracts some attention. People probably think I'm impatient – ​​or maybe I badly need to go to the bathroom. But my main concern is to avoid getting dizzy and falling over.
As a roller I don't have that problem because I sit. And as a roller, I once even was offered that I could queue before someone else. I didn't understand why I would be given priority as a roller, so I thanked for the offer.

When walking in public transport, I have to find my own place – just like everyone else. There is often pushing and pulling, especially during rush hours and on busier routes. I usually manage to get a seat. If necessary, I sit on the balcony on the stairs.
How different it is as a roller! Everyone jumps aside to let me out first. As nice as it is, often that is inconvenient, because I need more space. So I always give thanks and let others get out first.

Basically, when I'm walking, I'm just a jerk like everyone else on the street. Then no one sees my disabilities. And they certainly don't see that I'm actually a roller on the inside. Walking legs, but a roller at heart. Incognito!

This column was published on WijRollen on the 19th of May 2022.