"Your sex" - a vague question! 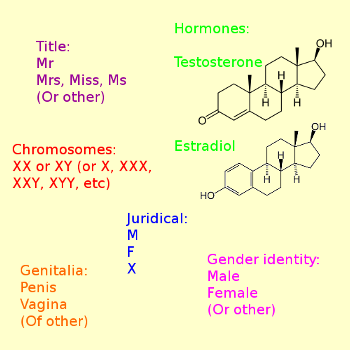 Many non-binary transgender people are extremely annoyed by the fact that you have to state your gender everywhere. For those who don't feel a man nor a woman, this is an impossible question to answer. Similar to a question like "What is your favorite colour?", and the only options you can tick are "green" or "orange". But your favorite colour is blue. Not nice!

Although I understand the dilemma, my personal irritation is at a different point. Usually when a form asks for gender, people are not really interested in my gender at all. In those cases, people usually only want to know how I would like to be addressed. Why doesn't such a form simply ask the question to which one wants an answer?!

Forms have the annoying habit to ask the wrong questions: my birth date is asked, while people want to know if I am 18 or older. I am asked for my street, house number and zip code to know in which neighbourhood I live. And my gender is asked to know how I want to be addressed. I can be extremely annoyed by this kind of stupidity.

Every once in a while I start a battle and send an email to such an organisation to ask why they are asking about my gender. (In Dutch they ask for "sex" instead of "gender".) Then I explain that I consider private what is in my pants. And I tell my assumption that they are only asking this question because they want to know how I would like to be addressed. I end with the suggestion that they could ask what they actually want to know: "title" instead of "gender" (or sex).

I often get no response to my mail. Or I get a response that this would be "not possible" because the system "does not allow that". Coincidentally, I am a web designer and I know that this is a simple adjustment. (If it really is such a big issue, they have hired a lazy or ignorant web designer!)

Occasionally I receive a positive response and the form is indeed adjusted. The ME/CFS Association and PGO Support are positive examples of this. So, emailing definitely makes sense! :-)

Recently I have a new strategy to offer. Of course I could email such an organisation with the question that their question is confusing to me. On what basis do they want my gender to be determined: do they look at my legal gender? At chromosomal gender? At hormonal gender? At my genitals? Or at my gender identity?

For many people all of this is the same, so they can easily answer this question. But that doesn't apply to everyone. If one or more of these types of gender are different, the question is much harder to impossible to answer...

This seems to be a very nice way to make clear the absurdity of the question about "gender". I am already looking forward to the next contact form, where this question is mandatory! ;-)