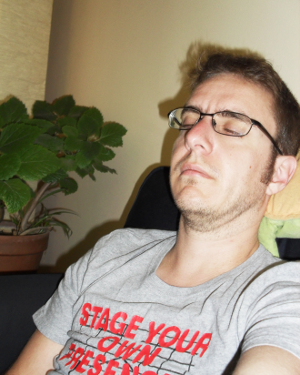 About 3 years ago I suddenly was exhaustedly tired. At that moment I had a temporary job doing light secretarial work for 3 days a week, but after work I was só tired that I fell asleep on the couch. The days I didn't work I needed to recover. In short, my week consisted of working, sleeping and eating. Suddenly I didn't have space for other things any more.

When this wasn't improved after a week, I realised that it wasn't a simple flu. At first I thought of a vitamin or mineral deficiency, because it was the matter a few years earlier. So I asked the general practitioner (gp) for a general blood test. This wasn't what was wrong: my blood values were exemplary!

The gp then referred me to an internist. He did a general physical examination (blood pressure, pulse, etc). He also repeated part of the blood tests, and extended it with additional blood tests.
He also made a heart film, because the internist thought my heart rate was very high. That was right, because my bus was delayed, so I had walked fast from the bus stop to the internist. Ever since that extreme fatigue, my heart needs a very long time to recover from this kind of small efforts. Fortunately, my heart was perfectly fine.

After about 3 weeks I had a suspicion about what could be going on. I had heard about ME/CFS, and I thought my symptoms were a bit like it. I remember thinking: "I hope I'm wrong, and something else is going on!"
That suspicion was my advantage, because I had seen on the internet that the CFS/ME Medical Centre in Amsterdam provides information on their website about necessary blood tests. So, when nothing came out of the internist's tests, I asked him to do some additional tests, so I could be referred to a ME specialist. Fortunately, the internist thought my request was reasonable and he was willing to cooperate.

At the follow-up meeting with the internist, it turned out that these additional tests didn't yield anything either. According to all results, I was in excellent health! Despite the fact that I took me the greatest difficulty to drag me through the days, because of that all-consuming fatigue. The internist told me he had no starting points for further investigation, and therefore he referred me back to the gp.

Not long after I was with the gp again. He spoke the unforgettable words: "Since we couldn't find anything physically, it will be psychological." I objected to that. I told about my suspicion of ME/CFS, and explained that I wanted to be referred to a ME/CFS specialist. Unfortunately, the gp didn't want to cooperate with that. He wanted me to fill out a screening test for psychological problems first and then we would talk further. I thought this was nonsense, but had little choice than to cooperate.

This screening test is a standardised questionnaire, which measures your score on the themes Stress, Depression, Anxiety and Somatisation (= physical stress complaints), based on answers to 50 questions. My scores were fine, only somatisation was slightly enhanced.
I had already told the gp that nothing psychical was going on, but now he believed it too. And I didn't think this slightly increased score for somatisation was weird: if you cut off someone's leg, then they will also score higher on somatisation! And I have said this literally to the gp :-)

Then the gp asked me what I would like to do now. That seemed clear to me: I still wanted that referral to a ME specialist. The gp warned me that this is an "diagnosis of exclusion", but gave me that coveted referral.

Luckily I was able to make an appointment at Stichting Cardiozorg in Hoofddorp without delay, the ME specialist I had in mind. He asked me questions for more than an hour: about me and my life, about medical interventions in the past, about complaints and symptoms now. At the end his firm conclusion was: "This is the classic story of someone with CFS." That diagnosis came in like a sledgehammer...

Even though I had had suspicions for weeks, I didn't expect to be actually right. Unconsciously I hoped something else would be going on, something that was easier to deal with. But no, I really had ME/CFS. That afternoon my world collapsed... When I was outside again, all the tension of the past weeks came off. Crying, I walked back to the station.

What to do now? I will tell you more about that in the following columns...