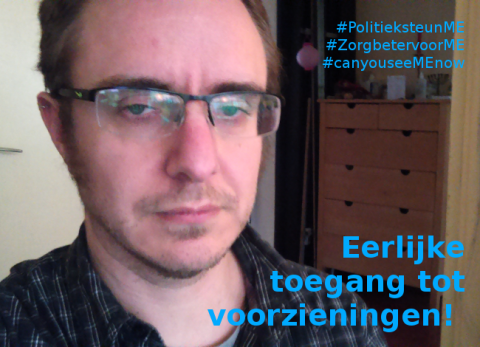 Today, the three patient organisations for people with ME/CFS have a round table discussion about ME with the committee of Family, health and care. I don't manage to be there in person, so I shared my story here.

I have ME for 3.5 years and can't work anymore. The first year I worked on arranging the absolute basis: domestic assistance, social benefit (because of being self-employed) and special social benefit (because of diet). When that was arranged, it was time to extend the domestic assistance. That took another quarter of a year.
In my condition, this was a good year of top sport. I am one of the "lucky ones" who managed to get it done at all. But it took me half a year to recover from this.

ME, fibromyalgia and POTS aren't on the lists of "recognised chronic diseases", so I am not eligible for any of the benefits for the chronically ill. But I do have the extra costs, for aids and medicines, among other things.
In short, I wasn't only confronted with a chronic illness that completely turned my life upside down, but I was immediately confronted with poverty and financial worries as well.
The financial misery caused extra stress, which was the last thing I needed at that time. The stress made the cognitive problems in particular much more serious than they already were. The situation made me desperate.

I make ends meet thanks to the weekly boxes from the Food Bank. I think it's embarrassing that in a country like the Netherlands, this apparently can't be different...

What I need? Regulations that really support people! (Instead of rules that try to exclude as many people as possible.)