ME/CFS and the MUPS myth 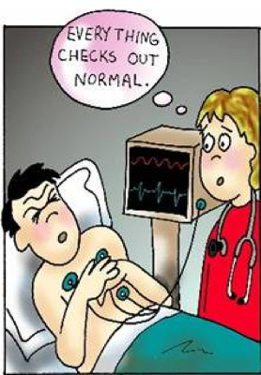 For a long time I didn't want to write about MUPS, for several reasons. Because ME/CFS is not a MUPS. Because I don't want to encourage the MUPS myth around ME/CFS. Because the MUPS myth bears witness to an unparalleled arrogance. Because... However, I notice it is time for me to do write something about it. Why? For exactly the same reasons!

MUPS is the abbreviation for Medically Unexplained Physical Symptoms. Solknet.com writes the following about this::

"Somatic" means "physical." Therefore, it is about physical complaints that can’t be explained by a medical cause, complaints that last longer than usual, that don’t pass, that get worse over time, spread to other parts of the body, or that constantly change. An explanation can be found in stress and everyday worries, although that isn’t always clear to the client. ” (consulted on 31 March 2019)

So far a fine explanation about MUPS. Indeed some people develop physical symptoms through tension, stress or trauma. These physical complaints are at least very annoying, and can sometimes be extremely painful, obstructing and/or disabling.

The symptoms manifest themselves physically, yet they have a psychological origin. That’s why a treatment focusing on the underlying psychological problems is the appropriate approach. The results of a MUPS treatment can be (very) positive in these cases.

But then the explanation about MUPS continues as follows:

And here, in my opinion, the text goes seriously wrong. Because here physical symptoms with a psychological background are lumped together with chronic diseases with a physical background. That is an incorrect and misleading representation of things, misleading patients (and their allies). That brings hope for recovery to people in a vulnerable position, which is unrealistic. And as a "bonus" they’re also talked into a (psychological) cause for their complaints, which isn’t there at all!

This type of treatment by doctors and other health care providers is known as gaslighting, epistemic injustice and questioning. Gaslighting means one makes people doubt their memory, perception and mind. (We owe this word to the movie "Gaslight.") Epistemic injustice is the phenomenon that doctors don’t take our knowledge about ourselves seriously because it is seen as part of our condition. And questioning means that caregivers doubt our ideas, beliefs, etc. (amongst others because of epistemic injustice).

This is the attitude of the infallible Herr Arzt who is raised high above humanity wearing his white coat. An attitude that costs human lives through pure self-righteousness and arrogance. And not only in the case of people with ME/CFS; many patients have to face this.
The scientific literature is clear about this: MUPS treatments with CBT and GET have none to very counterproductive effects on people with ME/CFS (see the references below).

Statements such as the second quotation conceal at least two capital errors:

First, ME/CFS is a physical condition with a biomedical cause. This has been recognised by the World Health Organization (WHO) as early as 1969 (!). ME/CFS is listed in the ICD-10 as "disorder of the nervous system", with code G93.3. (By the way, fibromyalgia is a "soft tissue disorder", with code M79.7 and whiplash falls under "dislocation and sprains at neck level" with code S13.4. Both physical disorders as well.) But the Netherlands knows better and doesn’t recognise the recognition of the WHO.
The advice on ME/CFS from the Dutch Health Council of March 2018 is also very clear: "ME/CFS is a serious chronic disease that substantially limits the functioning and quality of life of people suffering from it." Still this advice isn’t yet included in a new or revised ME/CFS Directive.

It is extremely sad that a group of doctors and other health care providers continue to deny reality, with all the (sometimes disastrous) consequences for their patients...

Secondly, it is an unprecedented arrogance to state that if a doctor can’t find the cause, the cause should be psychological. Of course it may also mean that the doctor didn’t search well or omitted to ask further, or didn’t do the right examinations. Or a condition may be so unknown, complex or new that the correct examinations aren’t known yet and/or aren’t technically possible yet. And money is involved too: we don’t conduct certain investigations because we think the costs are too high.

It is particularly embarrassing that doctors can’t say "I don't know", and therefore say "I can't find anything, so your belief makes you sick."

If you fail to find any cause of disease, do not assume that the patient has a psychiatric disease or a school or work avoidance. Sometimes either your knowledge or the necessary technology has not been in place to make the diagnosis. Sometimes the patient's symptoms preclude easy recognition of the illness at that date. (page 27)

A large proportion of doctors also persists that ME/CFS would be one of those "vague disorders", just like fibromyalgia and Lyme disease, for example. What these doctors mean is that the symptoms of these disorders occur often, and therefore don’t easily lead to one diagnosis.

That is what we have been waiting for for over a year: the moment that doctors are willing to incorporate these criteria into their protocols. That requires willingness, and thát is where the real problem is. No MUPS, but simply stubbornness of a professional group that isn’t yet willing to trade in their prejudices for scientific reality...

Below is a (chronological) selection from the multitude of scientific publications and other research, which shows that the usual MUPS treatments with CBT and GET have none to very counterproductive effects on people with ME/CFS:

Twisk, F.N.., Maes, M.: A review on cognitive behavorial therapy (CBT) and graded exercise therapy (GET) in myalgic encephalomyelitis (ME) / chronic fatigue syndrome (CFS): CBT/GET is not only ineffective and not evidence-based, but also potentially harmful for many patients with ME/CFS. Neuro Endocrinol Lett. 2009;30(3):284-99.

Forward ME, Oxford Brookes University. Evaluation of a survey exploring the experiences of adults and children with ME/CFS who have participated in CBT and GET interventional programmes. Results of Patient Survey, 3 April 2019.

Pleased to see new contributions to the debate.

I am always happy to see anti-psychobabble commentary. I agree that the evidence is overwhelming that ME is a physical condition, though it does involve the brain.

Its dubious to cite the WHO code as evidence though. Doctors are well aware its just a bureaucratic code. Its important for insurance and politics, but its not scientific.

There is enough hard biomedical evidence to show the extensive physical nature of the disease (or possibly family or spectrum of diseases). Psychobabblers will still try to say it might be physical, but its cause is mental.

I have blogged extensively on this, especially on Phoenix Rising.

When talking about vague symptoms, they are right that nearly all symptoms occur in other diseases. This is also the case for most of the biomedical testing. Yet that biomedical testing often matches the symptoms, or are associated with them, and establish a biological basis. We are now up to about 2500 biomarkers, and I strongly suspect that a full research lab, able to run any tests at all, will find hundreds to thousands of things wrong with each patient. Its a mistake to presume that the lack of a provable definitive diagnosis means nothing is wrong. It does mean that we really still do not understand ME though.

None of the stress/trauma research proves that these problems are not also physical. As soon as the word "mental" comes into play the psychobabblers can distort and claim and mislead.

One particular symptom, and the closely associated physical testing, is however unique to ME at this point in time. It is of course PEM, and the test that shows this best right now is the repeat CPET, though I am fascinated by invasive CPET.  These are now well established findings, and ME patients are winning court cases based on CPET results.

Other research is showing similar things related to PEM. Most recently, and only presented at a conference so far, is that ME might be a form of acquired complex V deficiency. This is not supposed to be even possible, but the hard data shows this .... there is a recent article on Health Rising about this. There is this common dogmatic belief, utterly implausible, that mitochondrial disorders are only inherited. Its adherence to dogma, and the irrational and evidence-poor claims that go with this, that lie at the core of most psychobabble.

Thanks for your comment, with all the extra info you provide.

Its dubious to cite the WHO code as evidence though. Doctors are well aware its just a bureaucratic code. Its important for insurance and politics, but its not scientific.

You are of course right! I have added this, because in the Netherlands most people (and I assume doctors too) don't even know about this ICD code. It is not used by Dutch health insurances or politics, as the believe ME/CFS is a mental condition is so very strong here.
The formal policy still is to use the Fukuda criteria for diagnosis, and the recommended treatment still is CGT-for-CFS and GET. People are denied benefits because they don't want to do CGT and/or GET, because "they refuse to cooperate to improve their health". Nonsense, of course. Unfortunately, the MUPS group is quite powerful here. (The NKCV, the Dutch MUPS group, has strong ties with the researchers of the PACE trial.)

Thanks for your research update! I am not able to read this myself, due to brain fog. (Despite my scientific background.) So I will have to rely on other people reading this stuff and relay the info, f.e. in my blogs.

Keep up the good work!

This column also appeared on SolveCFS.org, on 25th July 2019.