Deities with a disability 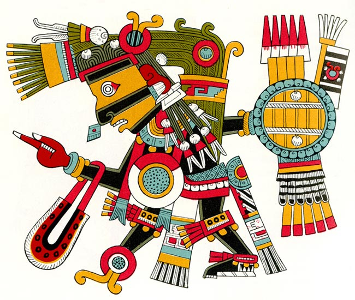 We gave this workshop "Dis_spelling disability: inclusiveness as a matter of fact" during the Spring Gathering of the Pagan Federation International Netherlands. Because the pagan community isn't always accessible for pagans with a disability yet. And because PFI Netherlands likes to see this changed.

Often accessibility mainly is a matter of doing a few things a bit differently. No hassle, no costs: just doing the same things you have always done, with slightly different accents. You will find some concrete tips for better accessibility in this flyer.

Deities with a disability

Many pantheons know one or more gods who would have a "disability" according to our modern Western standards. In the traditions themselves, this is not always seen that way. And sometimes so, because to gods nothing human is alien...

A disability, or not

A disability is a restriction that can be of a cognitive, developmental, intellectual, mental, physical and/or sensory nature. The disability may be congenital or acquired during life. In principle, a disability is only seen as a disability if it has a substantial impact on that person's life.

The latter condition is interesting when we look at disabilities in gods. The Hindu god Shiva usually is depicted with 4 arms, and in their capacity as a physician they often also have 5 heads. This would be a serious disbaility for people, but not for Shiva. Therefore Shiva is not disabled.
The Norse god Hodr, son of Odin, was born blind. This had a major impact on their life, because they needed a lot of help from the other gods. Therefore Hodr is disabled.

For people, it is a big difference whether a disability is congenital or acquired during life. This has two reasons: their own development and the reactions from their surrounding.

People with a congenital disability grow up with this disability. In their youth they learn to do things in such a way that they are hindered as little as possible by their disability. Often their environment tends to underestimate the child or to over-question it.
People who become disabled at some point in their lives often need time to adapt to this new reality. After a period of mourning usually a new balance is found. Their environment usually follows the person themselves.
People with disabilities also have a major impact on society as a whole, because disabilities confront people with their own imperfections and mortality.

However, it is obvious that there are hardly any goddesses with a disability. This may be a reflection of societies: perhaps there were (far) fewer women than men with a disability at the time. For women did not go to war and did not go hunting, so women suffered fewer injuries with permanent disabilities than men.

Striking is the number of divine blacksmiths that are crippled or paralysed. The stories often disagree about whether this was born or acquired at a very young age. A possible explanation is the fact that blacksmith is a relatively seated craft, certainly in the case of goldsmiths.

All these gods with a disability emphasise diversity in general. Most pantheons are much more flexible than our current society in terms of physical, psychological and/or gender differences. (For example, many gods have a masculine and feminine form, have a gender which is not as fixed as ours, or are downright non-binary.)

Flyer Pagan events accessible as a matter of fact (in Dutch)

Overview Deities with a disability (in Dutch)

Hello. The link to your list of deities with disabilities was broken. Could you email me that list? I'd love it for a creative project I am working on.

You disabled god list is indeed broken can I have a copyas well :) resilientgal@gmail.com

The link to the document

The link to the document should be fixed now!

I didn't realise the link is doing weird things when entering the comments. I am so sorry. It is solved now: all links are functioning as they should.

Hi there, I'm wondering if you have a copy of the document in English as well? Thank you

The document is not yet available in English. You're the 3rd person asking for it, so it may be time to start translating this document. (Although first my health has to improve to be able to do this.)

Hello - I'm a member of AIRA, a group working to bring awareness of ableism in Reclaiming (you can read about Reclaiming at reclaiming.org). I'm assembling the stories of disabled godds as a resource for rituals, trances, etc. It would hugely helpful for me to have your overview in English if possible - and if not, I'll just go through, pull out the names, and research their stories myself. Thanks!

Thank you for speaking up. Good to know my overview would be really helpful for you too. Offline a ffth person asked for a translation as well. So, good news: I will going to translate the overview!

However, it will take some time. I hope to be able to provide the translation at the end of September, or the beginning of October at the latest. I hope you have some time to wait...