About ME, CFS and ME/CFS 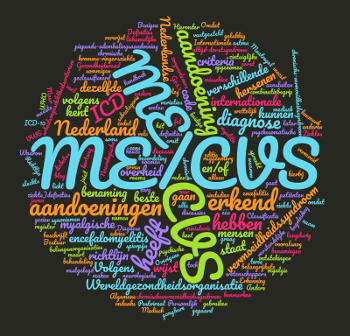 There is a lot of discussion about the names ME, CFS and ME/CFS. On this site I will use "ME/CFS". Below I would like to explain why.

But first some definitions, so we know what we are talking about:
- ME is short for myalgic encephalomyelitis, which indicates inflammation in the brain (encephalitis) and/or spinal cord (myelitis), accompanied by muscle pain (myalgia).
- CFS is short for chronic fatigue syndrome, which indicates long-term fatigue.

According to some, ME and CFS are synonyms for the same disease. According to others, it involves different disorders. The discussions about the best name can sometimes be very fierce.

From a medical point of view, the Netherlands only recognises the diagnosis CFS and not the diagnosis ME, even though the World Health Organisation has primarily recognised ME.
Most scientists assume that ME and CFS are two different names for the same condition, despite the variations in definitions (of both diseases).
The March 2018 Health Council's advice to the government uses ME/CFS.
Most advocay groups for people with ME and/or CFS also use the combination term ME/CFS.

Personally, I am not happy with the name CFS for the condition, because it only highlights one of many characteristics. And not even the most important characteristic!
We do not refer to rheumatism as "crooked fingers disease"? Or to asthma as "wheezing-breathing disorder"? Or to diabetes as "always-thirsty syndrome"? Then why is ME/CFS called "chronic fatigue syndrome"?!
Because in the Netherlands we can not decide for the time being and "ME/CFS" is the most common name, I will join in this.

By the way, according to the Dutch criteria, I have CFS and according to international criteria I have ME. That might be another reason to use ME/CFS! ;-)

The World Health Organization (WHO) recognised ME as a chronic neurological disorder in 1969 already. It has since been included in the International Classification of Diseases (ICD), the international handbook for all physical, sensory, psychological and mental disorders.
In the current edition of the ICD, the ICD-10, ME is classified under the "Neurological disorders", in the subcategory "Other disorders of the brain" as "Post viral fatigue syndrome" or "Benign myalgic encephalomyelitis" (code G93.3) . In the register, at CFS the ICD refers to this code.

A few years later, the Dutch government recognised CFS as a psychosomatic (!) condition. In 1999 CFS has been recognised as a medical incapacity criterion, which is legally secured in a General Measure of Governance. In 2012, the Ministry of Health, Welfare and Sports (VWS) adopted the guideline "Diagnosis, treatment, counseling and assessment of patients with chronic fatigue syndrome (CFS)", in short Guideline CFS. This guideline for health care providers describes the best health care for people with CFS. The Netherlands has no diagnosis "ME".